Managed Kafka for everyone (and more!)
Join Red Hat Solution Architects in the first webinar of our "Looking Forward with Red Hat Webinar Series".

In this webinar we will discuss a fairly new bit of the Red Hat portfolio: managed services. Of course, we will look at the already fairly established field of managed OpenShift on the various public clouds out there. On top of that, we will spend time looking at the really new ones: the upcoming managed services for Kafka, API management, Data Science, and Service Registry. What are these services, what do they offer to me and my business, and can I already use them?
Who should attend: Architects, product owners and software engineers
SPEAKER INFORMATION:
Maxim's background story is not a straight line from graduation to current position.
Instead, Maxim has worked in various fields, from law enforcement to academia, through being a consultant in several mid-size and large IT firms in the Netherlands, until ending up at Red Hat.
At Red Hat, Maxim is part of the presales team in the Netherlands. He also regularly speaks at conferences as a part-time evangelist.
Red Hat is the place where Maxim was destined to end up at. It was his ultimate goal ever since he started to work with Linux and other open source software in the early '00s. He is very passionate about Red Hat and the way Red Hat does it's software development: out in the open.
Maxim has spoken at various conferences, both in Europe and the United States, about the Red Hat portfolio and open society in general and open source in particular.
Maxim is practically bilingual, being able to present in Dutch and English with the same ease: he was voted #1 speaker at Red Hat Summit 2018 in San Francisco, an event with over 7000 attendees from across the globe and hundreds of breakout sessions. 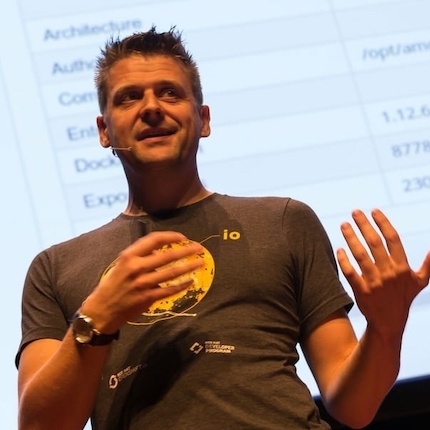 If you have any question, send us an email.